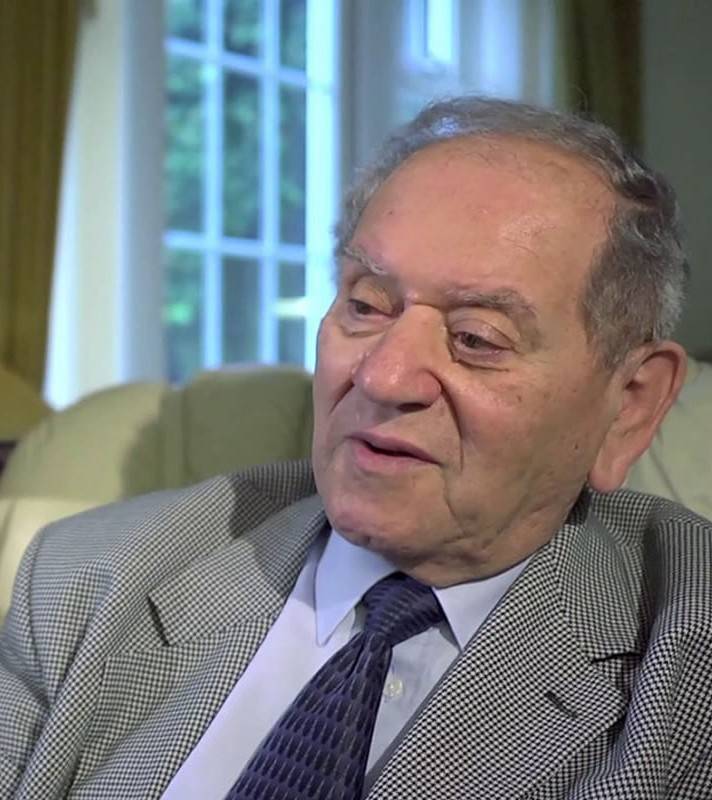 Arek was born and brought up in Poland, the son of a boot-maker for the army. He had four siblings and was brought up in the Jewish faith in a tight-knit, loving family. He remembers going to the park in the summer, ice-skating on the river in winter and singing solos in the choir. Arek went to a Jewish elementary school and a mixed secondary school. Jews in Poland were troubled by anti-Semitism, particularly after the ‘Polenaktion’ of 1938 in which Germany forcibly expelled many of its Polish Jewish citizens across the border.

On 1 September 1939 the Germany army attacked Poland. Arek’s family had to leave their home town and stay with relatives in Lodz, a big industrial city similar to Manchester. They walked there in a 65-km journey that took them three days. Arek remembers seeing the German motorbikes, tanks and planes that far outclassed anything the Polish army had to fight with. He also remembers seeing German soldiers laughing and joking while they humiliated Jewish men by cutting their beards off.

In 1940 the Jews of Lodz had to start wearing the star of David on their outer clothing and soon were forced into a ghetto, where food was rationed and people lived in very cramped conditions. Towards 1941 the authorities came to take Arek’s father to a work camp. As they took him out of the door he managed to escape. Arek’s brother managed to do the same thing, so 11-year-old Arek was taken instead. He spent the night in a police station and the following day he and other prisoners were taken to a railway station where Arek’s brother was waiting and wanted to take Arek’s place. Arek refused. He was taken to a camp called Otoschno, near Poznan, which was run by the SS. After 18 months there were only 11 of the original 2500 men left alive. Arek managed to survive through his job cleaning the camp commander’s office which meant he was able to steal food. In 1942 Arek was sent home. When he got there people came to ask him for news of their relatives. Arek told them that everybody was working because he couldn’t bear to tell them what had actually happened.

In August 1942 the Nazis decided to liquidate the ghetto. 4000 people were made to assemble in the church. Arek ran away on pretence of getting some water and went to join a group of people who had been selected to work.

Those in the church were taken to Chelmno death camp where they were gassed and buried in mass graves.

Arek and the other 150 people were taken to Lodz. The president of the ghetto demanded that the ghetto population should hand over 10,000 children. Arek knew he fell into that category. He managed to hide from the SS in a cemetery while the ghetto children were taken to Chelmno where they were also gassed. Alone, and without his family, Arek was accepted into the orphanage where he worked in the textile mill and was able to find food. He stayed there for two years.

in 1944 the Germans decided to liquidate the Lodz ghetto because the Russian army was getting closer. The remaining population was put on a goods train for the two-day journey to Auschwitz-Birkenau. The 185 children from the orphanage were among them. When they arrived at Auschwitz, Dr Mengele selected people to work and people to go straight to their deaths. Arek didn’t know what was happening, but he could tell that the fitter, healthier people were on the right so took advantage of a disturbance to run across to that side.

He was made to leave all his clothes and possessions, had his head and body shaved and was made to shower. He was given a striped suit to wear and was tattooed with the number B7608. From that day onward Arek lost his name and was only referred to by his number.

After a few weeks Arek was chosen with a group of other boys and taken to Auschwitz 1. He was put into a block with political prisoners of different nationalities and the food was a little better. He had to work as an agricultural labourer for the SS, ploughing fields and fertilising them with ashes from the crematorium. Arek remembers feeling the bones as he spread the ashes on the ground. He later worked in the fishing commando which involved catching fish from the River Vistula to be transported to Germany for food.

In January 1945 Arek could see and hear American and British bombers and knew the Germans were losing the war. On 18 January the Germans decided to clear Auschwitz camp. They took the remaining prisoners on a forced march, known as the death march, for three days with no food, wearing only their striped camp uniforms in deep snow and temperatures as low as minus 25 degrees. The survivors found themselves in Buchenwald in Germany where Arek was put into a children’s barrack. In April he and 3000 other people were taken to the city of Weimar in Germany, loaded onto open wagons and sent off on a month-long rail journey to Theresienstadt. Many people died on the train. Arek was one of the 600 who arrived alive in Czechoslovakia on 8 May 1945. There they were liberated by the Russian army.

In August 1945, after four months in Theresienstadt, Arek was taken to Prague as one of a group of 300 children and taken by plane to Windermere in the Lake District. They stayed in former factory accommodation and had some English lessons and some time to recover. Arek moved to Liverpool where he and some of the boys he had arrived with were able to learn a trade. Arek didn’t speak about his experences until 1995 when he wrote his book, A Detail of History. Today Arek goes to schools, universities and other organisations to talk about his experience of the Holocaust.

He hopes that by doing this he can help young people to build a better world. Arek later discovered that only 40 people from his home town survived the war.

Most people were killed in the death camp at Chelmno, including many members of his family.