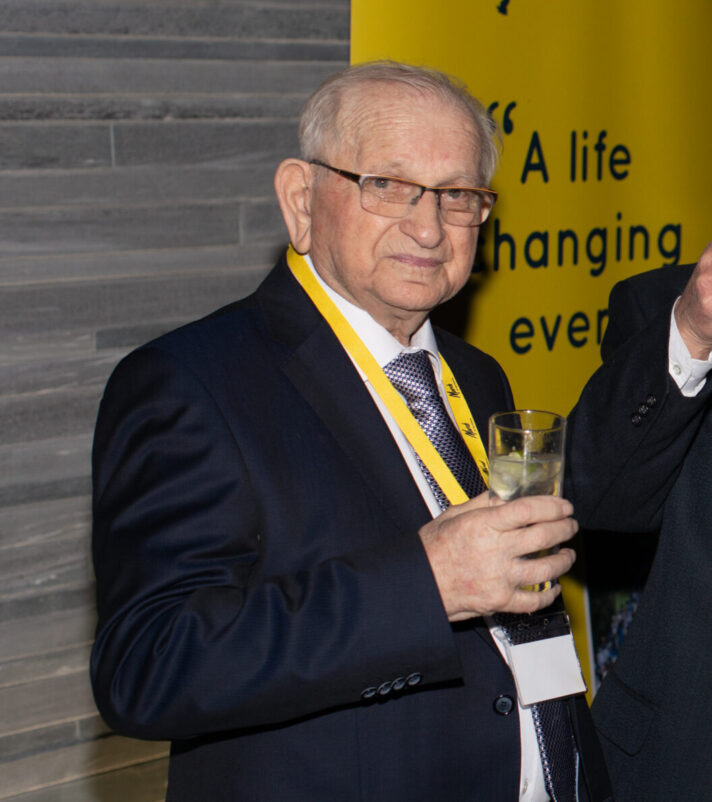 I remember being very impressed by the German troops when they marched in and occupied Warsaw. Unfortunately, we were heavily bombed and the Jewish district was extensively damaged.

Almost immediately, there was an acute shortage of food in our neighbourhood – which by now was a ghetto. Normally, my parents would stock up with potatoes and coal for the winter, but now, with the start of the war, this was impossible. Jewish people were not allowed to even queue for bread. Some people, desperate for food, ate horsemeat. People begged, others bartered for whatever food they could get, and we had to share our flat with another family.

The streets near our flat were littered daily with bodies of those who had died from starvation, disease or hypothermia during the bitterly cold Polish winter. Periodically, I saw the corpses collected from the sidewalks by horse drawn wooden carts.

In order to feed our family, my father sold his best winter coat, and with the money, I went with my mother and we bought two precious loaves of bread. On our way home, we were attacked by a stranger, who seized our bread, threw himself on the ground and gobbled one loaf himself. Thankfully we managed to save one loaf so the family could eat for a short while.

German lorries would arrive into our neighbourhood without warning. The soldiers would seize people at random off the streets or from synagogues; they were loaded up onto the lorries, taken away, and we never saw them again.

My parents managed to bribe a Polish lorry driver to smuggle me out of the ghetto, but at the last moment, he refused to take me. Our next attempt was successful, and posing as an Aryan, my cousin Rushka Kleiman and I caught a tram that ran through Warsaw, and we continued out of the ghetto. We then managed to get on a train to Ostrowiecz to go to stay with my Aunty. As a young 13 year old, I remember feeling so frightened that I would be recognised as a Jew that I hid in the toilet for two hours.

I had another aunt in Ostrowiecz who had four young children – two boys and two girls. My uncle paid a Polish man to look after the two boys. He took care of them for a short while, and then handed them over to the Nazis. The brothers’ older sister actually saw the Germans shoot both her brothers. A short while after arriving in Ostrowiecz, we were all evacuated. I was taken to Bozochoff camp. Some of us youngsters escaped by cutting through the camp fence. Once out of the camp, we hid in the fields but had no idea where we could go or what to do. We had no money, food or papers. The fear of being discovered by local people and betrayed by them, made us break back into the camp as we thought it would probably have been safer.

From Bozochoff, I was taken to another camp in Blizin. There, I was a part of a team who worked in a quarry breaking rocks. Rations were extremely meagre, and there wasn’t a moment when we weren’t hungry. Work was extremely physically challenging and our Ukrainian guards were cruel and brutal. I have horrific memories of pulling a cart filled with quarry stones up an incline, when a guard accused me of leaning on the wagon instead of pulling it. He pulled me ruthlessly into a nearby muddy field and ordered me to fall into the mud and get up repeatedly. I was so tired, frightened and in so much pain, I begged him to shoot me. He just hit me with the butt of his rifle and ordered me back to work.

One of the German officers in Blizin picked on well-build Jewish prisioners. I saw him beat them to death with a leather whip which had a metal tip on it. Conditions were dire. My first cousin Avram Kleiman died of typhus, and together with other corpses, he was buried by his fellow prisoners, in the nearby forest. From Blizin, I was then transported to Starachovice, then through to Skarzisko, and from there, I was taken to Auschwitz-Birkenau. On arrival, our transport was stripped naked, shaved, showered and disinfected. I was tattooed with the number B2413 and put into ‘A Lager’ – the quarantine camp, and assigned to Arbeitslager (labour camp) D. Ten of us were guarded by a Polish kapo, two SS guards and two Alsatian dogs and we sent to work digging ditches.

One of the Polish Kapo’s got drunk one day, and using a heavy piece of wood, struck me a mighty blow across my head for no apparent reason. Immediately, blood gushed from my head. He ordered me to wash the blood away in filthy water. I managed to bandage my head with a dirty rag. I was no longer able to work, and transferred to the Kinder block (children’s block).

Our block leader was aware that we were destined to go to the gas chambers, so he marched our block to the camp gates, pleading with the Germans that we were strong and hard workers. Fortunately, we were once again, spared.

We were then transported to Buchenwald. I remember the terrible day my new friends and I were sent in open wagons from Buchenwald to Theresienstadt concentration camp. This, from all my years in numerous concentration camps, was the worst experience of all. For more than three weeks, we had nothing to eat, had only the clothes we were standing up in, and survived this hellish journey on any snow, leaves and grass we could scavenge from the sides of the tracks when the wagons stopped. Most of my fellow passengers had died in the wagon prior to our arrival at Theresienstadt.

On the 8th May 1945, we were finally liberated by the Russian army.

I discovered that I lost both my parents and my eldest sister Lonia, but my younger sister Rushka also managed to survive the atrocities of the camps. We were the lucky ones.

The following August, the British government permitted 1000 Jewish children to find refuge in the UK. Unfortunately, only 732 could be found. I was one of them, and we arrived into a RAF camp in Windermere together with a group of about 300, always to be known as ‘The Boys’ – although there were quite a few girls with us. After finally settling in Manchester, I married Blanche, and started in the rag trade, selling menswear both to wholesalers and on the markets. We had four children, Gillian, Shelley, Jonathan and Darren. I now have five grandchildren.