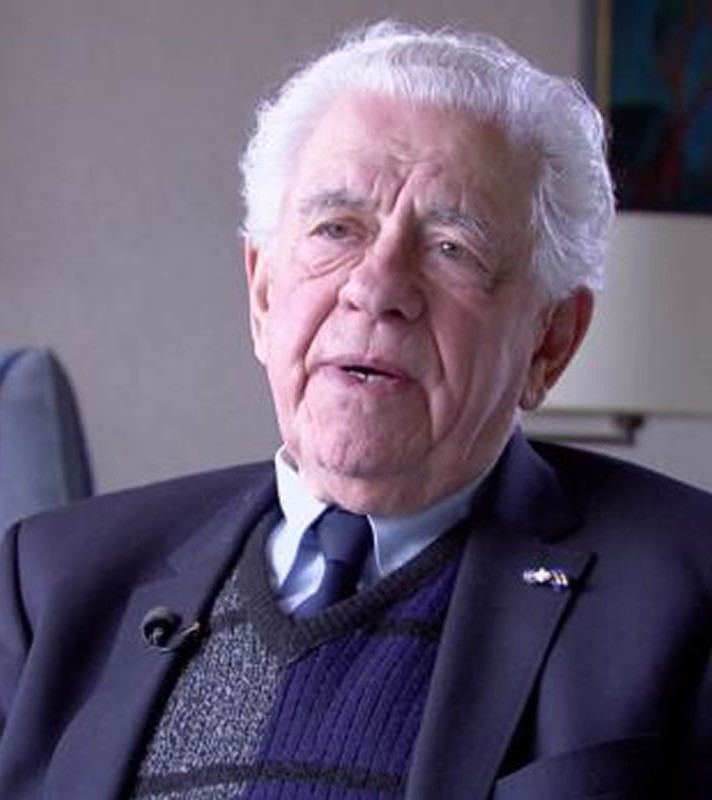 Ernst Verduin was 18 when he was shipped from Amsterdam to Westerbork before being sent on to Auschwitz in September 1943. Upon arrival in Auschwitz-Birkenau he was first selected for the gas chamber but then somehow managed to leave the “gas chamber group” and join the group selected for slave labour. “An SS-officer protested loudly, but I didn’t care… He didn’t use his machine gun and kill me, although he could have done so quite easily. I later learned that the SS wanted to avoid panic at all costs and that I wasn’t the only one who switched from one group to another.

I already knew about the gas chambers of Auschwitz when I was still in Holland. An SS-officer named Ettlinger who was stationed at the concentration camp of Vught, told me about it. Ettlinger had previously been stationed at Auschwitz, so he knew exactly what was going on there.”

“The worst thing I saw after my arrival at Auschwitz was a group of prisoners who entered the gas chambers. These people were about to die. I later tried not to remember this terrible spectacle.” Verduin only spent a few hours in Auschwitz I and II and was then transferred to Monowitz where he stayed between September 1943 and mid-January 1945.

One memory of his time in Auschwitz remains particularly distinctive: “It was a very hot day in June or July 1944 when I was at work in Monowitz, also known as Auschwitz III. And then I suddenly noticed a group of people who looked like actors. They were wearing long robes and strange headgear. Occasionally internees did perform a play in the camp. I wanted to find out myself and as I walked towards that group I was stopped by a high ranking SS-officer whom I didn’t know. He was from the main camp (Auschwitz I) or Birkenau (Auschwitz II). The officer asked me, ‘what do you want?’. ‘I just wanted to know whether these people are actors or not. Is there going to be a stage performance tonight?’ ‘These people aren’t actors,’ the SS-officer told me. ‘They are the Grand Mufti of Jerusalem and his retinue.’ I then asked him, ‘what is he doing here?’ ‘He is paying a visit to the camp,’ the SS-officer said. ‘He lives in Berlin where he enjoys Hitler’s personal protection. He is now paying a visit to Monowitz to see how Jews are working themselves to death in factories. He is also in Auschwitz to see the gas chambers. When we have won the war he will return to Palestine to build gas chambers and kill the Jews who are living over there.'”

When Haj Amin Al-Husseini visited Auschwitz and Monowitz in the summer of 1944, hundreds of thousands of Hungarian Jews were being exterminated. The SS-officer who told Verduin about the Mufti’s visit threatened him that if he would not resume work immediately he would leave Monowitz entirely. Verduin, of course, had no intention of being killed in the gas chambers of Birkenau, so he did as he was told. But he informed some of his trusted camp mates of what he had seen.

Verduin claims that few people believed him when he said that he saw how the Mufti of Jerusalem paid a visit to Auschwitz-Monowitz. Only Simon Wiesenthal wrote a book back in 1947 in which he claims that the Mufti and his staff “paid visits to the concentration camps of Auschwitz and Majdanek to convince themselves of the capacity of the crematoria… Haj Amin was introduced to the SS-guards and expressed his appreciation for those SS-men who were very capable.”

To tell his story, Verduin will go everywhere they are willing to hear him, including German audiences. Still very active at age 84, Verduin’s latest effort at remembrance is a walking route connecting Amsterdam’s Hollandse Schouwburg deportation point with Kamp Westerbork, which the Nazis used as their main Dutch staging ground for shipment to the death camps in the east. The walking route distance offers people time to reflect on the horrors Jewish countrymen experienced as they journeyed in sub-human conditions to their death.

When Ernst saw the films made after liberation, he said they were even worse than his own recollections. “The reality had been much worse than my own memory told me. I was in the belief that it was rather neat and organised within the camp. The films showed my memory suppressed the worst.”