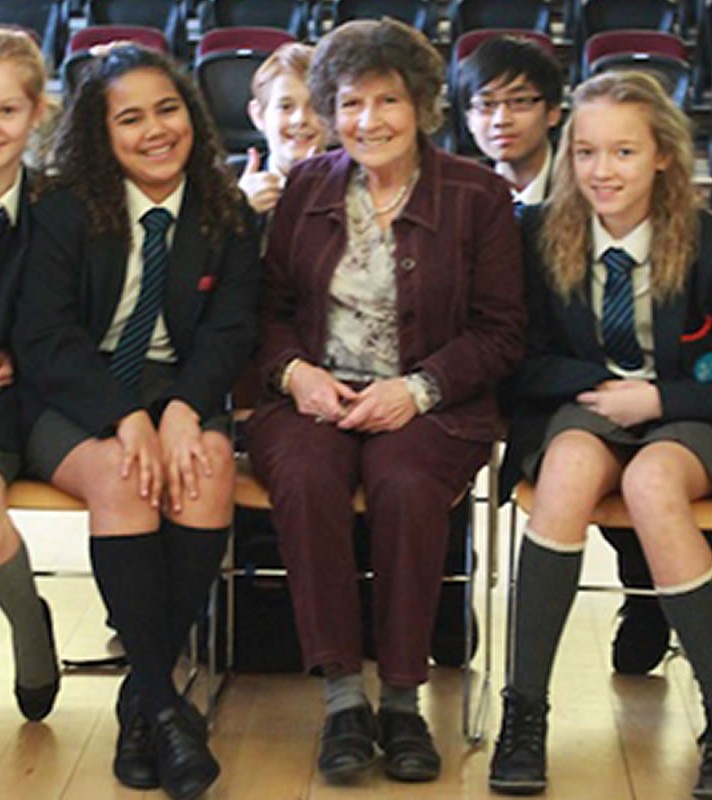 Barbara was born in 1938 and her earliest memories are of fleeing with her family to relatives in Kovno but once the Germans entered the town they returned to Warsaw. Her other memory took place in the Warsaw Ghetto. She recalls being forced to eat by her grandmother to keep up her strength.

She was then hidden by a Polish family in an apartment in Warsaw and had to spend her days standing behind a wardrobe so that she wouldn’t make a noise and alert the neighbours. The family only allowed her out to eat and sleep and not even to play with their daughter. Unbeknown to her, her mother was hiding in another apartment in the block but she and others were discovered and executed in the street. Barbara was taken by the family (even though she could barely walk on her aching legs) downstairs to see  the executions. She was simply too short to witness the event but heard everything and caught glimpses not realising her mother was one of those murdered.

When the family hiding her became afraid and the money for her keep ceased, the father took her on a tram ride during which she fell asleep. She awoke abandoned in a field on the outskirts of Warsaw, freezing cold and wearing a thin dress. There she remained for 2 days and two nights too afraid to go anywhere thinking she had been lost and that the father would retrace his steps and come and find her. In her testimony she says she was ‘disposed of’.

She was found by some young boys who wrapped her in their coats and took her to the local police station where they were fed and looked after her. They nevertheless had to inform the Germans who took her to the Gestapo. She was interrogated by them and vividly remembers the ‘bright lights’ – she only told them, as she had been briefed, that her name was Maria and never gave up the name of her parents or the fact that she was Jewish. She was around 4 years old!

The Gestapo sent her back to the police station and she was taken in by one of the policemen and his wife who had no children. Barbara (the Polish name they gave her) was looked after very well and came to regard the Mrs and Mrs Nawacki as her parents. Mrs Nawaki was a resourceful woman and the family never went hungry during the war. She goes as far as to say that apart from being terrified of the Germans she had a reasonably good life and was happy although remembers being lonely and not playing much with other children. She was officially adopted.

When te Warsaw uprising began in August 1944, 5 year old Barbara was slightly injured by a bomb and her friend, a few feet away, was killed. Their apartment block took a hit and became uninhabitable and the Germans ordered everyone to leave, so the family packed a cart with what they could salvage and walked to a farm outside the city. They, together with hundreds of people camped in the open for a few months. Barbara remembers provisions eventually being dropped by the Allies and her mother getting hold of the silk parachute, turning it into clothes to sell. Ukrainian soldiers took Mr Nawacki to a labour camp and she and Mrs Nawacki took their cart of possessions and walked 30 kilometres to a cousin in Grodzisk. On the way, bullets flew overhead and the sounds of war reverberated all around. Conditions in Grodzisk were terrible, very little food and crowded with refugees, but the resourceful Mrs Nawacki managed to sew garments and sell them for food.

When the Russians arrived they were hailed as heroes. The Nawacki family, now reunited, walked back to Warsaw but were unable to find anywhere to stay so went to his brother in Poznan, eventually purchasing a smallholding outside the town.

Life was tough and the family worked hard. Barbara, almost 7 years old, was able to attend school but helped tend the vegetables and milk their two cows each day.

In April 1946 the Nawackis returned home from church one Sunday to find a couple waiting for them. The main claimed to be Barbara’s father having survived a concentration camp and with him was a young woman eventually to become his wife. He was able to prove who he was and Barbara eventually had to leave with them for Warsaw. This devastated both Barbara and the Nawackis but they managed to keep in regular contact. Barbara says she did not have a happy childhood – her father hardly related and her stepmother showed no interest in her – she was very much left to her own devices.

In spite of the austere communist regime, the family lead a very middle class ‘ intelligentsia’ lifestyle and Barbara went to a private school (driven by a chauffeur) and then to university. Her father, a doctor, made a good living; they took regular holidays and lived well. They never related at all to being Jewish. Barbara explains that you were either Polish or Jewish but there was no such thing as being ‘Polish Jews’. Her father and stepmother chose to be Polish.

It was only during the student unrest in the wake of the Hungarian Revolution that Barbara’s interest in her Jewish roots was awakened. She joined a Zionist organisation and they would meet the trains of Russian Jews passing through on their way to Israel.