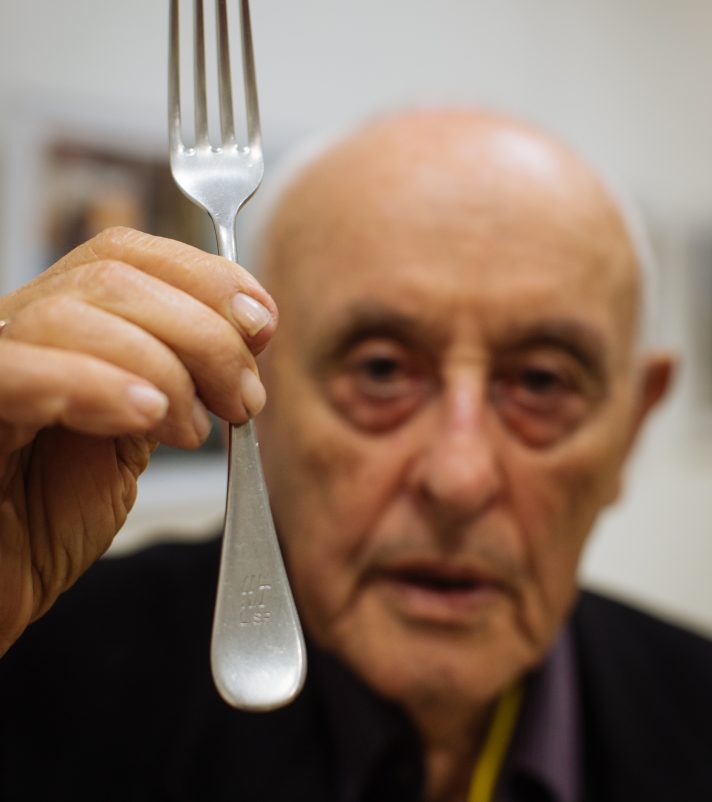 Arie was born in Siauliai, Lithuania, in 1929, a town of 8,000 Jews, and considers himself as a holocaust survivor. He was the youngest of 3 siblings (two girls and one boy). When he was 12, the German army entered his village and hung notifications, saying: ‘’We are here’’. These signs declared the application of the Nuremberg laws on the Jews and threatened those who will opposed them with death. The Nazis imposed the wearing the yellow star of David, dividing the Jews from the rest. Arie recalls that the Lithuanians collaborated with the Nazis in the village, kidnapping Jews, especially the Jewish leaders and rabbis.

A week after the Germans entered, they imprisoned all the men they could find and executed them in the forests surrounding the village. Arie’s family was one of the last to enter the Siauliai Ghetto and were used as labour for the Germans, receiving 150 grams of bread per day. Those who were found smuggling food were beaten and whipped in front of the whole ghetto.

In 1943 Arie witnessed one of the most shattering events of the war – The ‘’Kinderaction’’, which was the act of kidnapping the children and transporting them to labour and death camps. One day empty trucks appeared in the ghetto with Ukraine soldiers serving the SS unit. The soldiers took advantage of the fact that the parents were at enforced labour and took all the children they could find. Arie heard a rumour about the action a few minutes before and was able to escape to a nearby factory and was hidden there until the soldiers left. When the parents returned from work they realised that their children were gone. Arie describes the parents’ screams and howling as “an impossible
and unbearable sound’’.

In 1944 the Germans started to retreat and received orders to take the prisoners and leave no one alive in the Ghetto. Arie was transported in a small cattle train for four days to Stutthof concentration camp in Germany. He recalls: ‘’You get off the train and see soldiers shouting and dogs barking. You immediately enter a selection process. Women with children to the right and men to the left. They tried to terrorise us’’. Arie, separated from the men, was taken to the children’s line and found himself without his brother for the first time in the war. He went through the role calls, suffered intimidation and humiliation in the camp and was then sent to Dachau labour camp to work in building
an underground factory for the German aeroplanes.

In 1945 as Allied forces advanced into the heart of Germany the Nazis rounded-up the prisoners and started to march them, in what was called later, ‘’The Death March’’. Arie and the prisoners walked for 14 days, guarded by machine guns and armed soldiers and hearing explosions and sirens around, as the war was drawing to an end. Those who stumbled or were unable to continue, were shot. On the 1 May the march stopped. After a cold and snowy night, the prisoners awoke and realised that the German soldiers had fled. A few minutes later, they met the first American troops and vehicles and understood that they were saved. Arie called the liberation day on the 2 May, ‘’The day of rebirth’’. That day the prisoners sang the ‘’Hatikva’’, excited but concerned about the future.

Arie joined the first Jewish brigade unit coming from Israel and prepared to depart to his new home. After the war, he was reunited with his brother and sisters, joined the newly formed Israel Defence Force and slowly built a new family out of the ruins. He worked in the aviation industry for most of his life, got married and has 3 children, 6 grandchildren and 1 great-grandchild.

Arie’s brother, Dov Shilansky, who went through a similar journey, became a commander in the ‘’Etzel’’ movement (Zionist paramilitary group that operated in the British Mandate of Palestine from 1931 to 1948) and then a member of the Israeli Parliament and the speaker of the parliament, ‘’The Knesset’’. During his time as a politician, Dov started an initiative called ‘’ םש שי שיא לכל ’’ (‘’Every person has a name’’), commemorating and humanising each Holocaust victim. Arie says that his family is living proof of the victory of good over evil and the strength of the Jewish people.