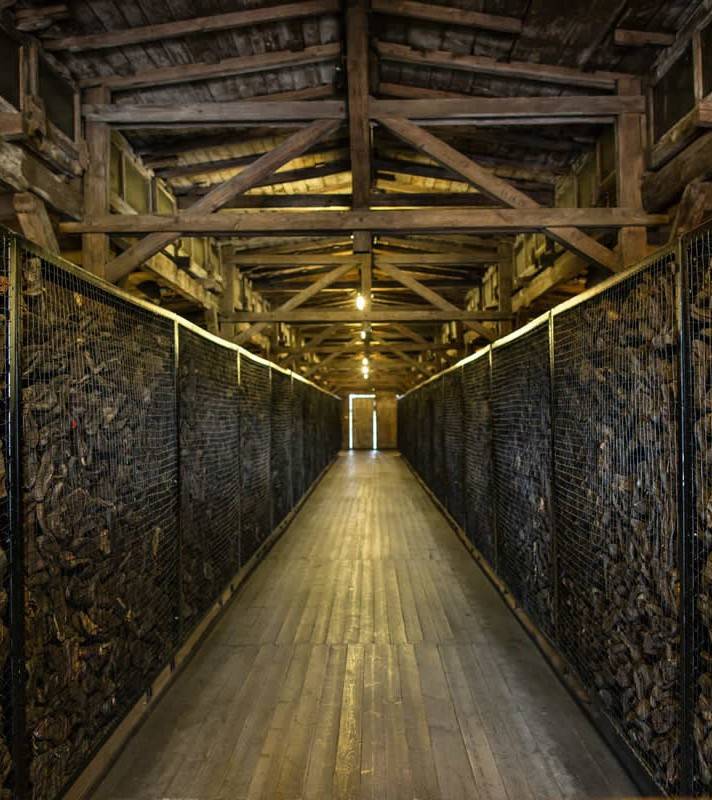 The more I learned, the less I understood. I am standing in the WIZO cafeteria, in a queue at the soup tureen. The lady in front of me ladles rich vegetable broth into her bowl and I do not need to pray that there will be sufficient vegetables left in the soup to sustain me. No, I don’t need to think about that at all. Yet I do. Why?

Take me back a couple of months, I am reading everything I can in preparation for my trip to Poland; the heart-wrenching observations of Ellie Wiesel, Primo Levi, Mary Berg and others who bore witness. Suggested reading, they called it. Often, mid-sentence, unable to stomach any more of my bedtime reading – Martin Gilbert’s detailed chronicle, ‘The Holocaust’ – my eyes would remain wide open all night as I fought and lost battles against images of dead bodies piled up in mass graves. I revisited the battered old suitcase in our storeroom, wherein lies the minutiae of my late father-in-laws’ internment in Auschwitz-Birkenau and Buchenwald, including the rough and stained, striped shirt of the uniform that he was wearing when he was liberated by American soldiers in 1945. It is tiny.

So I had read much, I had listened to the memoirs of survivors in my husband’s family. I had, on more than one occasion, been to Yad Vashem. I thought I was prepared. I was not prepared at all.

On Sunday 12th April, I flew from Tel Aviv to Warsaw and joined British friends in the March of the Living (UK) group. We were 250 participants from the UK of all walks of life, Jews, non-Jews, students, professionals, youth leaders, laypersons and first and second-generation Holocaust survivors. We were split over five buses, each with its own group leader, Holocaust survivor and educator. Each of us on our own personal mission to listen, to learn, to feel. Yet the more I learned, the more I saw, the less I understood. For the entire five days of the trip and from now until the end of my days, I ask, “Why?”

We went from Warsaw to Lublin to Krakow and saw the scant remnants of our once-proud, once-fine upstanding ancestors. In Poland, the history of Jewish life dated back over a millennium and formed a vital part of the cultural history. I was intrigued to learn that in the 1930s, over 120 different Jewish newspapers were printed on a daily or weekly in Polish, Yiddish and Hebrew, serving a Jewish population of some three and a half million. Between the 1939 invasion of Poland and the end of World War II, 90% of Polish Jewry perished.

From the stripping of basic human rights to the desecration of the sacred symbols of the Jewish faith, from the segregation and discrimination came humiliation and degradation and the internment in ghettos. We learned of the cruelty and barbarism, the likes of which any human being cannot comprehend. And yet, European Jewry refused to give up hope. As hunger, random killings, overcrowding, disease and desperation reigned in the ghettos, and Jewish life was defaced, there were those who, ever optimistic, dared to dream of better days ahead. The contents of their suitcases as they packed for their journey eastwards paid testament to that fact.

But they never got to unpack. In the museum of Auschwitz preserved for eternity are some of those same suitcases and their contents: brushes, combs, cosmetics, religious artefacts, dishes, pots and pans. In one of the displays, a lone rolling pin caught my eye. Did the lady who owned that rolling pin dare to imagine that one day she would bake delicious kuchen for her family as she always had?

We, who had risen fresh from our comfortable beds in four-star hotels, had eaten hearty breakfasts. We, who had packed ample layers against the elements in our backpacks, emerged from our air-conditioned luxury coaches and descended to the depths of hell wearing our comfortable walking shoes, safe in the knowledge that we had an exit strategy. At any time, we could turn our back on the abject terror we witnessed and find our way out. And we did – but it does not leave us.

We visited the death camp of Majdanek and Belzec, Auschwitz and Auschwitz Birkenau where European Jewry was viciously terrorized, incarcerated, incinerated and virtually wiped out. At each place, we stood solemnly at the monuments of remembrance and recited a Kaddish, each of us, in our own way, sanctifying the memory of those we never knew but loved anyway

Sometimes, the gravity of what we witnessed got too much for us and we would walk out to breathe fresh air. I put my hand on the cold, damp wall of the gas chambers in Auschwitz-Birkenau and heard silent screams and I wept, and then felt guilty for weeping – for I did not experience the hunger, the whip, the pain of burning flesh, the panic. I had no right to cry.

This year marked the 70th anniversary since the liberation of Auschwitz and Bergen-Belsen and the end of the Second World War. The precious survivors amongst us are well into their eighties. They know, as we do, that they are the final witnesses to the horrors of the Holocaust, and they have made it their life’s work to share their stories with the coming generation.

At the Belzec death camp, one of our survivors, in trembling voice, recited Kaddish for his late parents and little sister who were murdered before his very eyes. This was the same man who gave me my new preoccupation with the soup tureen. He had told us, over dinner back at the hotel, that in those dark days of abject hunger, it was a lucky man who got his broth from the bottom of the pan because that’s where the vegetables lurked.

For four days in April, our journey took us deeper into hell but on the fifth day, the scene at Auschwitz shifted inexplicably. This evil place took on a different, hopeful guise as some 12,000 plus participants of March of the Living (MOL) worldwide descended from their coaches on this perfect sunny day, wearing their MOL jackets and baseball caps and carrying Israeli flags. We marched as if an ocean of blue that surged slowly yet forcefully forward alongside the train tracks that had brought our ancestors to their certain death. We marched as one, against the past, towards the future, because we are living and we can.

We marched solemnly and as we entered Birkenau the names of murdered children rang out through loudspeakers. We drank copious amounts of water as we retraced the steps of the thirsty and the starving and those doomed to die. We placed markers on the train tracks of those we had lost. I put down two markers; one to remember my husband’s lost family members and another for those WIZO women from 15 federations in Eastern Europe who had worked for the promise of the future State of Israel – and I felt so humbled to do so. And how strange, that amongst the throng of marchers I saw one of our WIZO Presidents, Estela Faskha from Panama and we hugged. Each of us mirroring the others’ emotions.

The march concluded in a solemn and poignant ceremony, attended by Rabbi Israel Meir Lau, himself a child survivor of Buchenwald and messages from His Holiness Pope Francis and the President of the State of Israel, Reuvin Rivlin. Torches were lit in commemoration of those murdered, in tribute to the Righteous Among the Nations and in honour of the survivors who rebuilt their lives.

As the last torch was lit for the State of Israel where the Jewish people were reborn, and Dudu Fisher, led the March of the Living Children’s Choir in a rousing rendition of Hatikvah, I once again found myself in floods of tears and this time, I felt no guilt in crying. I just felt humbled and grateful to live as a free woman in a free country.