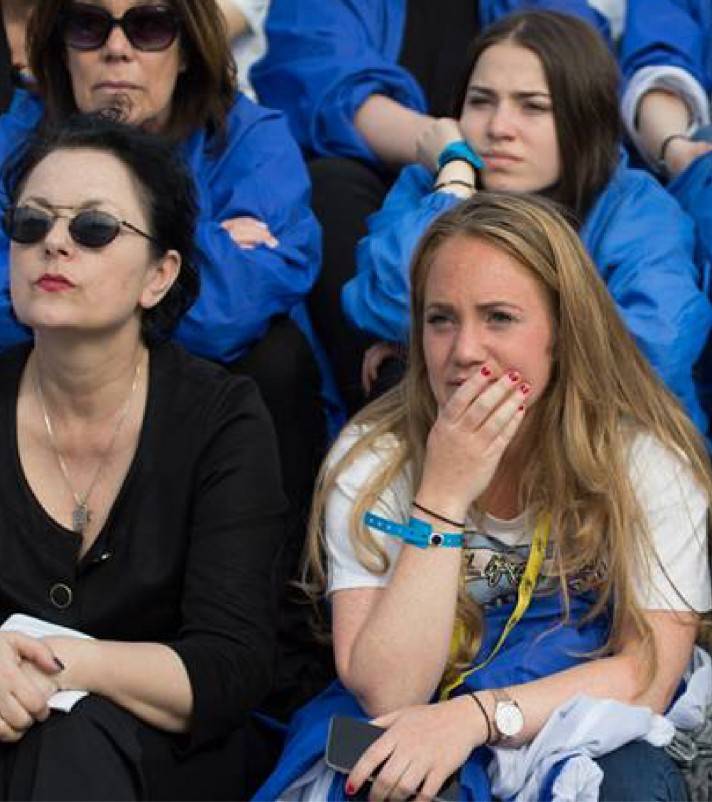 After 1 hour sleep and a 4am wake up, we arrived in Warsaw around midday with a fully packed day ahead of us. Whilst we learnt about the Warsaw Ghetto, visiting the bunker where the Jewish people conducted the uprising, as well as monuments to do with the Ghetto, there was a specific focus on Jewish life existing before and after the Holocaust today.

The day began with a visit to the Warsaw Cemetery, and a discussion surrounding the different Jewish directions one would have taken at the time. The cemetery was in use before the Holocaust and is a sign of the life, and death that took part in Poland pre-1939.

Following the visits to the Warsaw ghetto uprising bunker, and a walk around Warsaw, we visited the newly opened, and extremely impressive ‘Polin Museum’, which extensively details the last 1000 years of Jewish culture and life in Poland, which was destroyed by Nazi Germany during the Holocaust.

Destroyed, or so we thought. As our first day was brought to a close, our tour guide around the museum confidently told us that “the museum is symbolic of the revival that Polish Jewry is seeing today.”

Today began with a 3 hour drive to Lublin, home to around 35,000 Jews before the Holocaust. We visited the newly renovated Lublin Yeshiva, which had once been the centre of religious Polish life. When taken over by the Nazi’s once they had occupied Poland, the yeshiva was turned into a hospital for the Nazi’s.

The majority of the books and religious artefacts had been burned by the Nazi’s, and it is only in recent years that the Yeshiva has been restored for visitors. We learnt and discussed excerpts from the Mishnah, and davened Minchah in the place where the synagogue has been restored, within the Yeshiva itself. In doing so, we truly brought Jewish life back to Lublin.

No more than 10 minutes from the Yeshiva, is the Concentration Camp of Majdanek. An incredibly strange place, literally situated in the middle of Lublin, with the picture attached to this post the one I took today, of the houses overlooking the camp. There are main roads next to the camp, and normal every day shops just over the road, yards from where 80,000 Jews were sent to their deaths at the hands of the Nazis.

Whilst at the Yeshiva, the Holocaust survivor for our bus, Mala Tribich, told us her story from the Shoah. An inspirational, lucky, and ultimately victorious tale of how she survived Bergen Belsen camp, to go on and marry, and be fortunate enough to have both kids and grandkids. The sentiment of victory was only echoed by another survivor’s account we were told at Majdanek. Despite having now passed away, she requested that her story be told and for it to be known that she had won. She requested for us to be shown a picture of her in Israel, with her children and grandchildren, to signify that she had won, the Nazi’s had not.

Day 3 began with another 3 hour bus journey to the small and personally, previously unheard of town of Lancut, where we explored a restored synagogue, destroyed during the War. We learnt about the Chassidim of the town, and the different ways they taught/learnt Judaism before the Shoah. To them, Judaism was not about what would happen to a Jewish person after they died, to get closer to G-d for that purpose, but to feel it in the moment and be Jewish for the now.

Another 2 hour journey followed this, to Kraków. We visited 4 or 5 synagogues in close proximity to one another, learning that there were actually 13 in this particular area of Kraków. The Shul that was chosen by any Jewish resident of Kraków to attend, is said to have displayed a lot about a Jewish person at that time; where his loyalties lay, what language he may have spoken, and how he may have felt about Aliyah for example.

Lastly, this evening we visited the Kraków JCC, and were given another opportunity to listen to a survivor’s testimony, the heroic story of Arek Hersh. We were also given the chance to meet young Polish Jews and non Jews. Much like the museum in Warsaw was said to be symbolic of the revival of Jewish life in Poland, the same can be said for the JCC in Kraków.

On a personal note, growing up with @RedbridgeJCC has made me truly appreciate the work that a JCC can do in an area. Having had the opportunity with @RedbridgeJCC to visit both Staten Island JCC in New York and Pisgat Ze’ev JCC in Jerusalem, I have somewhat of an affinity with Jewish Community Centre’s, so it was amazing to be able to visit one in a country where the Jewish people suffered such serious persecution.

The one thing which truly struck me was speaking to the Jewish and non-Jewish young volunteers and listening to their stories, their reasons for wanting to help restore Jewish life in Kraków. One of the non-Jewish volunteers told us a great quote from the Rabbi at the JCC. When asked about how many Jews there are now in Kraków, he responded by saying he isn’t sure, but he knows there will be more tomorrow, than there were yesterday. I can truly say that leaving the Kraków JCC, I have not felt so positive about European Jewry in a very long time.

Today was dedicated to visiting both of the Auschwitz sites, before the March tomorrow. We firstly visited Auschwitz Berkanau, an incredibly large, eerie space, solely dedicated to the extermination of all its inhabitants.

We discussed the moral dilemmas surrounding the Jewish sonnderkomando, and whether they can count as victims or perpetrators. It would be a lie for me to say that I didn’t leave Birkenau still unsure of this dilemma, and I certainly left feeling empty, numb.

Auschwitz I was another sobering experience, walking from barrack to barrack exploring the pure evil of the Nazi regime, all the time questioning the events of the Shoah.

Tonight, on the 70th anniversary of the liberation of Bergen Belsen by the British forces, on Yom Hashoah, March of the Living UK held a memorial service, attended by Chief Rabbi Mirvis. Each UK bus read their story of the trip so far, Kaddish was recited and the Hatikvah was sung. Overall, the responsibility of this generation to educate and ensure that the Shoah is not forgotten, was re-affirmed. Tonight, March of the Living UK stood as one and said Never Again.

The March. 11,000 Jewish people marching from Auschwitz I to Birkenau. The single most unique, and surreal experience of my life.

To walk around Auschwitz, talking with people from all over the USA, Mexico, Panama, Australia, Israel, Holland, to name a few.

To walk around Auschwitz, to witness what can only be described as an absolute sea of Israeli flags, in a show of defiance with the world’s only Jewish state, in a place where 1,100,000 Jewish people were murdered in the Shoah.

I may have thought I had previously, but I only truly understood the meaning of Am Yisrael Chai, today. The Jewish people do live on, and today I was privileged and fortunate, to be in a position along with 11,000 other Jewish people to walk out of Auschwitz.

Holocaust victims were remembered, songs were solemnly sung, candles were lit, and El Malei Rachamim was read out expertly by a 102 year old Austrian Holocaust survivor; a living reminder of the strength of the Jewish people.

Today March of the Living remembered the victims of the Holocaust, and in ensuring that the victims are remembered, we must continue to live our lives in a Jewish way. Whilst today was a Remembrance Day for the victims of the holocaust, it was also paradoxically, a celebration of the Jewish people. As we walked under the infamous sign ‘Arbeit Macht Frei’ singing Am Yisrael Chai, it couldn’t be clearer to me that the Jewish people live on, and will continue to do so in the future.

My words do not really do justice, to what has simply been an incredible day, and week. The 6 million Jewish men, women and children, murdered in the Shoah, will never be forgotten.

March of the Living 2015. Unforgettable.