Why visiting Auschwitz doesn’t have to be a harrowing experience 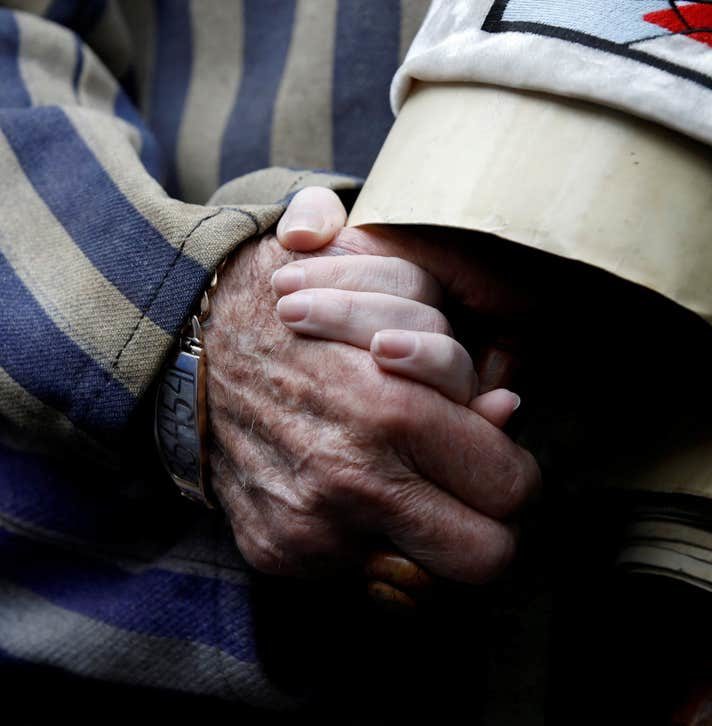 Can humour help heal Holocaust survivors? Maybe, says Darren Richman. As the ‘third generation survivor’ visits the concentration camps of Poland, he finds that comedy can be a useful shield.

“In Jewish stories laughter and trembling are so curiously intermingled that it is not easy to determine the relation of the two.” Saul Bellow

A few years ago, while taking part in the March of the Living educational programme, a Holocaust survivor was surprised to reach the toilets at Auschwitz and be asked to part with two zloty in order to gain entry. The ageing visitor silently lifted up his sleeve, pointed to the tattooed number on his arm and said, “The last time I was here I didn’t have to pay.”

That is a joke that’s not a joke, a line that is almost impossible to know how to respond to. I know the story because it was told to us by one of my own March of the Living educators, a man who had witnessed the response first-hand. I have always made sense of the world through humour but there are some things that cannot be made sense of however good the gag. It takes more than an apostrophe to distinguish manslaughter from man’s laughter.

I am a “third generation survivor”, a term I dislike because, inherited trauma or not, my grandfather endured Auschwitz at an age when I was in Edgware. I can’t remember a time when I didn’t know about the camps, something I only realised was unusual at a school dominated by gentiles. When I reached the sixth form, my friend and I visited Auschwitz-Birkenau and spent the day quoting Alan Partridge in a bid to distract ourselves from the enormity of it all. Comedy was a useful shield that day. The humour had a point, just as it does in the old joke about a survivor going to heaven and telling God a Holocaust joke. God is unamused and the survivor replies, “Oh well, I guess you had to be there.” Underneath the gag is a clear message – He wasn’t. Another joke that is not a joke.

It seems apt that my main takeaway from that trip was “never again” because that was exactly how I felt. And yet, in late 2014, almost 70 years after liberation, I accompanied my grandfather and several other members of the family on a devastating return trip to Poland. My grandfather, the most optimistic and good-humoured of men, was uncharacteristically quiet and withdrawn. None of us had ever seen him like this, but he wasn’t the only one struggling to cope. It reminded me of my favourite Groucho Marx story, in which the comedy icon visited the village in Germany where his mother had been born. This was in 1964 and Groucho discovered that all the Jewish graves had been destroyed by Nazis. His response was to hire a car and have a chauffeur drive the group to the bunker where Hitler was said to have committed suicide. On reaching the site, the comedian launched into a frenetic Charleston dance routine in his trademark beret on the supposed grave without so much as a smile. This lasted a couple of minutes and one member of the group later commented, “Nobody applauded. Nobody laughed.”

Je suis Marxiste, tendance Groucho. On the day we toured the camp in the company of Grandpa Zigi, we were all Marxists.

Flight of the Conchords once sang, “Jen said she’d never ever see me again, when I saw her again, she said it again” and I couldn’t help but think of this as I embarked on an unlikely third trip to Auschwitz. March of the Living UK is an astonishing six day educational journey in Poland that brings together people from all over the world and concludes with thousands of participants marching from Auschwitz to Birkenau, the largest Nazi concentration camp complex. My grandfather was liberated while on a death march in May 1945, the contrast with the March of the Living could not have been more pronounced.

The night before we boarded the plane, a gunman opened fire at a synagogue in San Diego on the last day of Passover. One woman was killed and three other people were injured, including the synagogue’s rabbi. A week earlier, on Good Friday, footage emerged of a Judas effigy being beaten, hanged and burned in Pruchnik, Poland, which looked suspiciously like the kind of caricature of an Orthodox Jew prevalent in Nazi propaganda. Comedy is tragedy plus time but sometimes the joke never becomes funny. I was joined by my sister and three close friends, all Jewish, just as I would have been in the direst of circumstances.

Much of the discussion before departure and during our daily processing sessions centred on the idea of stories and how we would all have a different one to tell by the end of the week since Jews like stories almost as much as we like jokes. Viktor Frankl found meaning and hope in his Auschwitz experiences, Primo Levi’s death at the age of 67 was ruled a suicide. There is no correct response.

On our second day in Poland, at the concentration camp in Majdanek, the weather conditions were apocalyptic as we reached the end of the tour and were confronted with a mausoleum containing the ashes and remains of cremated victims. I held my inconsolable sister as we talked about our grandfather and how lucky we were.

As the rain poured down, our group huddled together and said Kaddish, the prayer for mourners intended to show praise for God in spite of loss. Zigi has always told us there was no God in the camps, only a desire for food. “I guess you had to be there.” When my grandfather first returned to the camps with his two daughters in the 1990s, he looked to the heavens, held them close and said: “Hitler did not succeed.”

At Auschwitz-Birkenau, a survivor named Renee Salt told us her own story of survival inside one of the barracks. Renee had actually pulled out of last year’s March of the Living because she didn’t feel up to it and yet here she was, in her 90th year, reliving her traumatic youth at the very location the events occurred. There were long pauses and worried looks exchanged by our group leaders; Renee was shaking at times but she got through it and, incredibly, delivered her testimony again later that same day.

Perhaps the most shocking thing in Auschwitz seemed prosaic at first glance. Stored behind glass, like the human hair and clothes elsewhere in the museum, we came face to face with a mountain of cooking utensils confiscated from prisoners on arrival at the camp. Something about the optimism and naivety of people thinking they would be able to do their cooking at Auschwitz called to mind my grandfather seeing the chimney fill with smoke upon arrival and assuming bread was being baked. Elsewhere in the museum, I was struck by how little children’s clothing and shoes seem to have changed since the 1940s. This was an entirely different trip now I was a parent.

The march itself was a strangely upbeat affair as thousands of Jews exchanged badges and jokes on perhaps the one day of the year when Auschwitz does not feel like Auschwitz. A kind of hysteria took over on the bus at the end of the day, as though we all had to do something with the intensity of feelings even if it was making daft speeches on the microphone and reminiscing about the pop music of our youth. That night, at our final processing session, it was humour that once again defined the mood.

I have hardly scratched the surface of all that we experienced during our time in Poland but we were encouraged to tell our own story so here’s a short one about living, not dying:

In July 2016, our first child was born prematurely and spent the first few weeks of his life in hospital. My wife and I used comedy as our means of escape, devouring Curb your Enthusiasm DVDs and Tim Vine radio shows and crying tears of laughter and sadness. The child, our son, was given the middle name Zigi after the great-grandfather whose survival instinct he emulated. His first name is Isaac, the Hebrew meaning of which is, “He will laugh.”

Our trip to Poland and Italy was, by a distance, the longest I have been apart from my son since he was born. When I finally got home, one of the first things my son did was tell me a joke he’d come up with. This is a very new skill for Isaac and, without going into detail, the gag made very little sense but involved poo. When he’d finished telling the joke, I held Isaac Zigi in my arms and we both laughed.

Darren is putting together a book in which 25 prominent Jews will write an essay in response to the question, “What does being Jewish mean to you?” To pledge for a copy, click here https://unbound.com/books/jewishquestion/

For more details on March of the Living UK, click here https://www.marchoftheliving.org.uk/