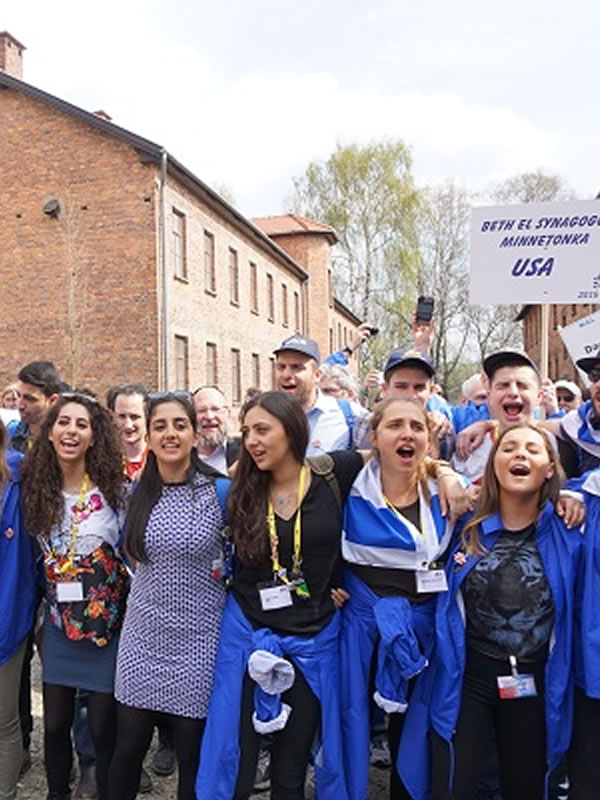 At the airport, Ziggy Shipper, a scarcely believable 85, flirts with anyone within arm’s reach. In just a week in Poland, Ziggy, once a native of Lodz and now as proud a Briton as anyone – “I’ve been to four Royal Garden parties!” – has managed to win the hearts of all British participants in the March of the Living.

The March, it is fair to say, is an extraordinary event. First launched in 1988, at its essence it is a life-affirming walk of three kilometres from the Auschwitz  1 death camp to Birkenau. American groups usually follow the March with a trip to Israel. Britain does it differently – and in my opinion, does it better.

March of the Living 2015 was special because it was the 70th anniversary of the liberation of Bergen-Belsen – by British armed forces – and because the UK delegation was the largest which has ever gone to Poland.

The event is the brainchild of businessman Scott Saunders, who has, with dogged determination, upped the British numbers from a handful in 2010 to this year’s record attendance. Those in Poland were mainly students and young professionals, and the atmosphere was both joyous and intense.

The aim is to provide a rite of passage experience for young British Jews which can offer a different path to their Jewish identity.

The programme, divided between Warsaw and Krakow, uses the life stories of accompanying survivors – this year there were six – to help the understanding of the Holocaust. En route, highly trained educators guide the participants through the arc of Nazi persecution, with immense emphasis on the density of Jewish life in Poland before the war.

At times it was like attending a giant tutorial post-university, with the opportunity to listen and learn and give feedback – on the spot where so many unthinkable crimes took place.

Chief Rabbi Ephraim Mirvis, in an unexpected visit, spent a late-night workshop with students which had them queuing up the following morning to have their pictures taken with him.

What was it like, I wondered, to listen to survivor Harry (Chaim) Olmer as he stood in Belzec or Auschwitz and relived the shame and humiliation of life in the camps? And what does it tell the students when they see a man who was persecuted for being a Jew – and yet who is first down to say shacharit in the morning?

At Zbylitowska Gora, a forest not far from Krakow, there is no sign of what might have happened there in 1942.

Part of the group stands in shocked silence as educator Maureen Kendler recounts the story of an Einsatzgruppen “aktion” – one of thousands – where between 6,000 and 7,000 Jews were killed, 800 of them children. They lie today in pits in the forest, unmarked and unmemorialised. The only sign here says the area is a nature reserve. That night, Ziggy Shipper electrifies his audience at the Krakow Jewish Community Centre with the story of his life. “The question shouldn’t be, how can I remember what happened. It should be, how can I forget it?” he says, simply.

Just 10 metres away from the gas chambers of Auschwitz lies the home of the camp commandant, Rudolf Hoess. “How can a human being do what he did all day and in the evening, go home to his family and listen to music?” asks Ziggy. The dark stories continue and Ziggy, like each of his fellow survivors on this trip – Eve Kugler, Mala Tribich, Harry Olmer, Renee Salt, and Arek Hersh – declares: “It is my duty to speak. What about those who died, and there is no one to speak for them?”

The unspoken question as the years go by is, of course, who will speak for those who died when there are no more survivors. And this is a question which the British March of the Living organisation aims to tackle, by passing the message on, so that those who are witness to the survivors today may, in turn, become witnesses to Jewish history tomorrow.

One of the strangest aspects of this year’s March of the Living is that of Poland itself, and the tiny, though growing, resurgence of Jewish life. New Yorker Jonathan Ornstein has lived in Krakow for 13 years after service in the IDF and now runs the bursting-at-the-seams Jewish Community Centre, which has a programme easily comparable with London’s JW3 and has sparked a sister JCC recently opened in Warsaw.

Londoner Robert Desmond has uprooted himself and lives in Katowice, once a centre of Jewish life, with his girlfriend. Now he volunteers at the JCC in Krakow and helps with the UK March of the Living visits, and says it is perfectly possible to live an enjoyable Jewish life in Poland.

The Poles, for their part, are welcoming and open to possibilities, though some are cynical about this initiative. It is clear, however, that many young Poles are rediscovering their Jewish roots, long hidden, first under the Nazis and then under the Communists, and at least 50 non-Jews volunteer cheerfully at the JCC in Krakow. A huge delegation of applauding Polish Christians cheered the Marchers at Auschwitz on Thursday, and many non-Jews took part in the March itself.

In the queue to get in to the Auschwitz Museum (where inside you are charged to use the restrooms, unless you are an indignant survivor, refusing to pay a zloty for the privilege), Will Cohen of Kilburn remembers his father’s parents, who fled Nazi Germany in 1939. “I had always wanted to see where the Holocaust happened,” he says. “and now we are running out of direct witnesses.” We file in to the museum, past the nightmare showcases of stacks of human hair, artificial limbs and heartbreaking mountains of children’s suitcases, intended to accompany them to a better life.

And we are the ones with a better life. Chief Rabbi Mirvis issued a challenge  to participants: don’t just go home and think of this as just another visit, he said. Use it to make yourself a better Jew.

It is hard, after this week, not to respond to that challenge.