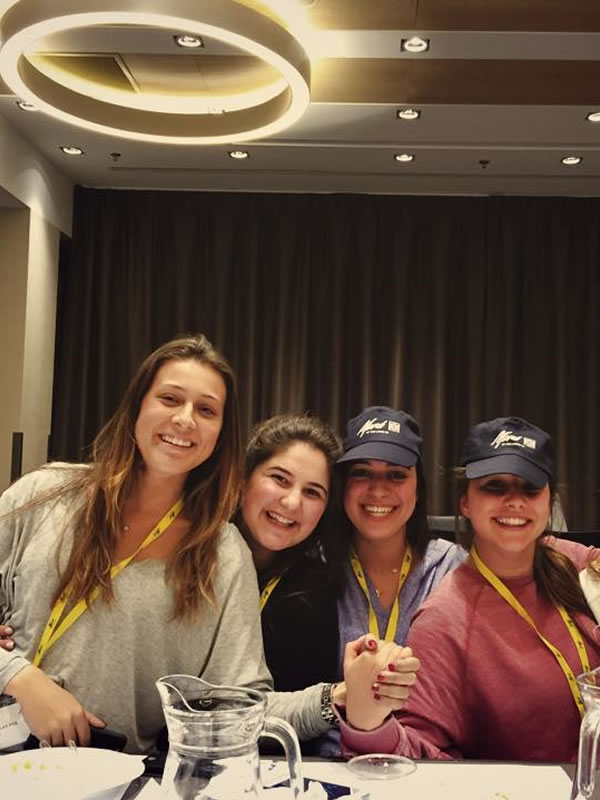 “Arbeit macht frei” – “work makes you free” – is known around the world as the notorious sign over the gates of Auschwitz, where 1.1 million prisoners were murdered by the Nazis.

But last Thursday a different message rang out, as 11,000 people marched through those gates, chanting “Am yisrael chai” – the nation of Israel lives. The occasion was March of the Living, the annual event that sees Jews and non-Jews, young people and Holocaust survivors from all over the globe travel to Poland to mark Yom Hashoah at the camp.

This year, a record 250 people joined the British delegation, and for 20-year-old London student Adam Henderson, the trip was having a profound impact.

“I used to be scared of coming here, of what I would have to face,” he said.

“But I’m no longer intimidated. I am free to walk in and out of my own accord and we are here.”

The five-day event featured sessions on the history of the Holocaust and visits to important Jewish sites. But the centrepiece was a three-kilometre walk from Auschwitz to Birkenau, symbolising the death march taken by thousands of camp inmates towards the end of the war.

Participants from 45 countries marched out of the Auschwitz gates, draped in flags and singing songs in celebration of life that the Nazi’s failed to destroy.

It was what Clive Lawton, one of the educators on the visit, described triumphantly as a “real ‘na-na-na-na- na’ moment in history to the Nazis – you tried to kill us, but you didn’t do it”.

For March of the Living UK chairman, Scott Saunders, the record size of the British group was “the realisation of a dream”.

He said: “I first experienced March of the Living in 2010 and there was no British group represented. I knew then we had to have people here.

“And I think the atmosphere is great. It is a chance to celebrate life.”

Making up the UK group was 14 organisations, including the Union of Jewish Students, United Jewish Israel Appeal Birthright, and seven youth movements.

Mr Saunders said: “It is rare that we get to come together as a community, but Hitler would not have discriminated if you were this group or that group.

“March of the Living is a proper educational experience for everyone, it is not groups turning up for a day, doing the march and leaving, which can sometimes happen. I wanted to provide young people with a more comprehensive and complex narrative without some of the political agenda that happens elsewhere.”

In the build-up to the march, the UK group was split up and put on six buses, each bus accompanied by an educator and a Holocaust survivor.

Survivor Zigi Shipper, 85, was 14 when he arrived at Auschwitz. He told his tour group how he spent days journeying there in a cattle truck so crowded there was only room to sit down once several passengers had died.

He said: “I didn’t feel human. I was so desperate I was hoping someone would die so I could just sit. I didn’t understand how I could think that.”

He said: “I’ve been to Poland three times since November and it never gets easier. It is the first time I’ve done a trip like this and it is hard.”

On Tuesday, his group visited a forest near the town of Dabrowa Tarnowska where 800 children were killed along with their parents.

Standing on the ground, fathers were forced to dig pits for the bodies of their children, educator Maureen Kendler said: “It is quite hard to know where to tread. You can see how those who committed atrocities here could do what they liked.”

Mala Tribich, an 84-year-old survivor, was accompanying a group of 30 from the Union of Jewish students.

She said: “I know my story will be remembered. I’ve written it down. I’ve spoken about it. The dead who have no voice, whose stories are not told are the ones I worry for, and this will get the young people thinking about them.”

As students linked arm in arm with survivors passed under that notorious sign, it was clear that the new generation was well aware of its duty to remember.

“We were here yesterday crying and feeling the emotion,” said graduate Joanne Mully. “But today it is a celebration that we can come in here and we can walk out of the camp because it is our choice.”