A Song of Hope from Bergen-Belsen 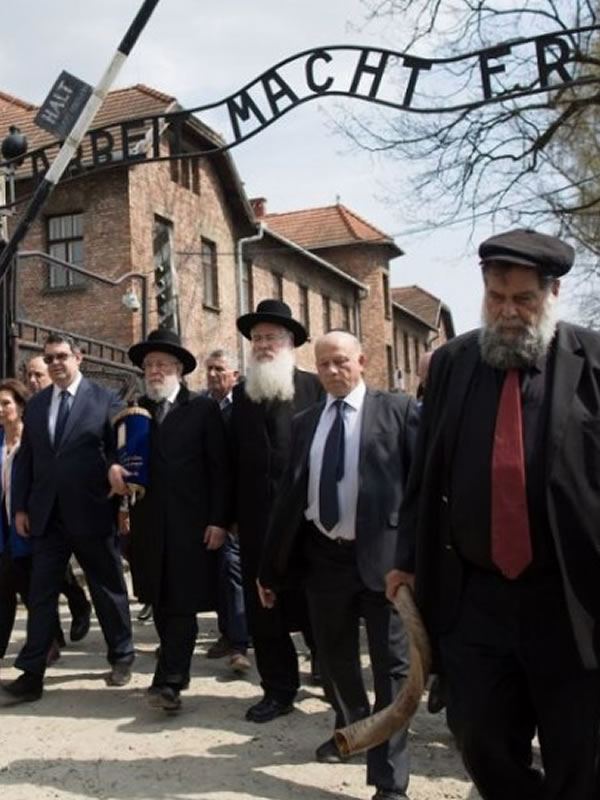 Jenni Frazer | The Times of Israel

Over a time span of 70 years and a lifetime of pain, suffering and survival, British Jews marked the anniversary of the liberation of Bergen-Belsen on Holocaust Remembrance Day Thursday at a March of the Living event in Krakow.

During the 1945 ceremony, some of the survivors broke into song — their voices frail and quavering — singing a familiar melody but with unrecognizable words. The song was a version of Naftali Imber’s poem, “Hatikva” — three years before the creation of the State of Israel and its adoption as the national anthem.

In a remarkable recording of an open-air service in Bergen-Belsen held on the first Shabbat after liberation by the 11th Armoured Division of the British Army on April 15, 1945, the BBC’s veteran broadcaster, Richard Dimbleby, sounded on the verge of tears as he witnessed the survivors singing this version. “Around us are corpses that there has not been time to clear,” said Dimbleby.

As the creaky recording played in Krakow’s Galicia Museum, 250 British Jews who had gathered in Poland to take part in this year’s March of the Living attempted to join in with the Bergen-Belsen Hatikvah, before discovering that the words were different. But two of the survivors present at the ceremony knew the words. They were Mala Tribich and Renee Salt, both of whom were Polish-born and were liberated from Bergen-Belsen after spending time in ghettos and camps; Mala in Ravensbruck, Renee in Auschwitz.

Testimony: Mala Tribich
Mala Tribich remembers the day she entered the camp. It was February 1945 and Tribich, then known as Mala Helfgott, was 14 and responsible for her seven-year-old cousin, Ann, after the deaths of much of their family.

“The train [from Ravensbruck] stopped quite a long way from the camp,” she said. “We had to jump down from the wagons and walk. Then we were told that there was no room so we were put in a big tent overnight, and walked again to the main camp in the morning.”

“It was like something out of hell,” she continued. “There was a kind of heavy smog, and a foul smell, with skeletal figures shuffling everywhere like zombies. You could be talking to someone and they would collapse and die as one was talking. There were bodies everywhere, piles of twisted and decaying corpses… this camp was built for 3,000 and when we got there, there were 69,000 inside”.

Testimony: Renee Salt
Renee Salt’s experience of entering Bergen-Belsen was just as surreal. Then known as Rywka Ruchla Berkowitz, she had managed to stay with her mother throughout the war and was working with her in a small camp near Hamburg. In March 1945, Renee and her mother were working when a bull escaped from a nearby slaughterhouse and attacked her mother, goring and injuring her.

“She never worked again after that,” said Salt. When the small camps were evacuated by the Nazis that month, both women were transferred to Bergen-Belsen, Renee’s mother on a stretcher and in a different cattle truck.

“We got off the train and the road was littered with corpses of people who didn’t make it. This was Bergen-Belsen, but we didn’t know. We saw skeletons, walking. Somehow I found a corner and fell asleep, but woke up covered in lice. I was terrified, and without my mother for the first time,” she said.

Remarkably, though separated, Renee found her mother. The chaos of Bergen-Belsen allowed the 15-year-old to step outside her hut and fighting her way through the piles of dead bodies, found her mother still alive – but only just.

When the prisoners saw SS officers wearing white armbands, they knew the war was coming to an end.

Renee saw a British tank and then collapsed, and did not register what had happened for a further 10-12 days.

But two days after Renee regained consciousness, in the makeshift hospital erected by the British inside a tank training school, her mother died. She was just 42; it was April 27, 1945 and she was buried with thousands of others, who had died after liberation, in a mass grave.

Liberation
Mala Helfgott, in her part of the concentration camp, had heard that there was a children’s hut, with marginally better conditions, and set out with her little cousin Ann to find it. It was mostly populated by Dutch children and, at 14, Mala was too old to enter; but Ann point-blank refused to be separated from her cousin and so both were allowed in.

Eventually, like so many in Bergen-Belsen, Mala contracted typhus and was extremely ill.

“I remember lying on my bunk by the window, and seeing people running. All I could think was, how do they have the strength to run?”

“The British were so kind to us. They came with a stretcher for me, and I said, no, I will walk. But of course I collapsed.”

Both Mala and Renee’s story had happy endings: Mala, after spending two years in Sweden, went to Britain to be reunited with her brother, Ben Helfgott, who is thought to be the only Holocaust survivor to win an Olympic medal for Britain [he was a weightlifter]. She married and rebuilt her family.

Renee, for her part, spent the after-war years in Paris, and in 1947 married Charles Salt who, by coincidence, had been a military policeman attached to the British liberation forces at Bergen-Belsen.

March of the Living
Mala Tribich and Renee Salt were two of six survivors to accompany the British March of the Living delegation to Poland to share their stories with the participants. The march’s UK delegation provided an intensive educational experience, aimed primarily at university-age students and young adult professionals. This year, for the first time, a group of non-Jewish participants came from the London Business School.

The packed UK program – part of which was attended by British Chief Rabbi Ephraim Mirvis – took participants to Warsaw, the death camp of Majdanek, and an exhaustive tour of Auschwitz 1 and Birkenau before the March itself on April 16. More than 11,500 people took part in the three-kilometer walk between Auschwitz and Birkenau, with huge delegations from Latin America as well as North America and Europe.

Mirvis took the opportunity to issue a rallying call to the largely young crowd of participants. The enormity of the Holocaust, he told his audience, should be matched by an enormity of response.

“This should be a life-changing turning point for you,” he said. “Which organizations are you going to join, how are you going to strengthen your Jewish identity? Don’t let this just become another trip which you will forget about when you get home. You have to think, how will this experience make me a better Jew?”

The British marchers rose to say Kaddish for those who perished at Bergen-Belsen.

The ghostly voices of the survivors, desperately gathering the strength to sing Naftali Imber’s poem of hope, made a Holocaust Remembrance Day like no other.